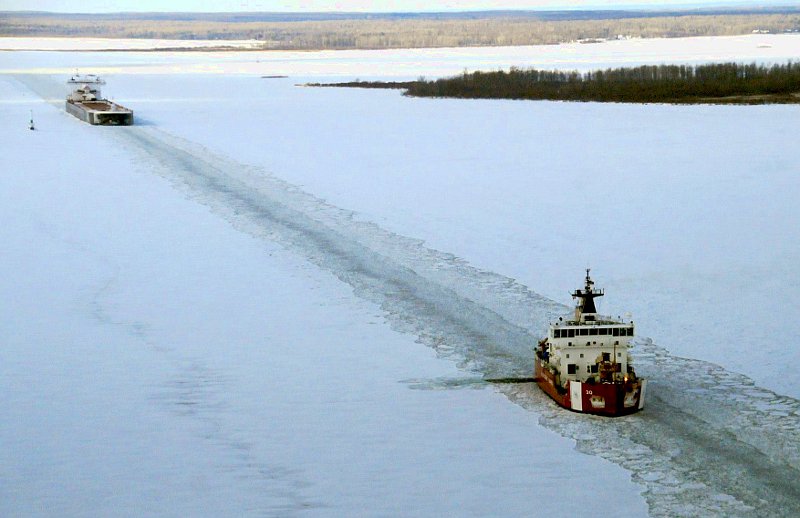 The Mackinaw breaking a path for a downbound merchant vessel in Munuscong Bay on the St. Mary's River in December 2013. Photo courtesy of U.S. Coast Guard Air Station Traverse City.

GREEN BAY — Coast Guard cutters Mackinaw and Mobile Bay began the spring break out today of the Sturgeon Bay Ship Canal, a sure sign of spring.

This afternoon, the Kaye E. Barker will depart Fincantieri Bay Shipbuilding and proceeds west then north into the bay of Green Bay.

On Tuesday, the captain of the Port Lake Michigan will open the southern half of Green Bay to commercial navigation.

The regulated navigation area previously closed will be reopened as the two Coast Guard ice breakers proceed south creating a track through the ice from Sturgeon Bay to the Fox River entrance, according to a Coast Guard news release.

These icebreaking operations will likely occur in areas used by recreational users such as, but not limited to, the Fox River, Green Bay Entrance Channel, the Sturgeon Bay Ship Canal, Menominee River Entrance, and the waters of Green Bay from Minneapolis Shoal Light to the Fox River Entrance. Next week, these icebreaking efforts will increase in frequency as ice conditions deteriorate and commercial navigation increases.

Unlike some previous winters, regional ice cover did not reach traditional thicknesses.

The forecast for the next seven to ten days calls for temperatures supporting the rapid deterioration of ice.

All snowmobile, All Terrain Vehicle (ATV) operators, ice fishing, and other recreational users of the ice should recognize the instability of the ice, plan their activities carefully, and use caution near the ice, especially in proximity to charted navigation areas.